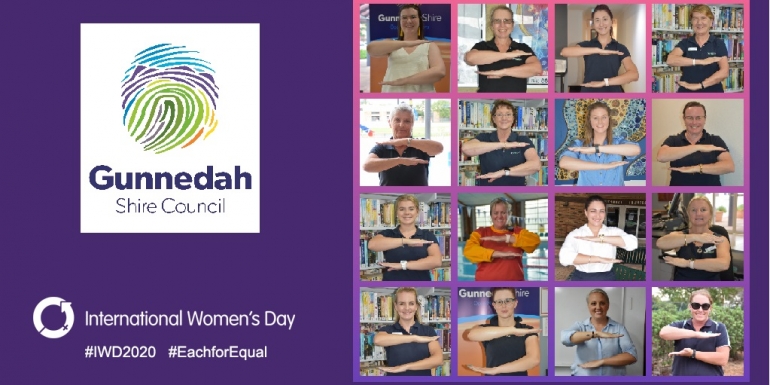 Gunnedah Shire has no shortage of talented, hard-working women, and this week is the time to celebrate.

It is International Women’s Week 2020, with the theme of “An equal world is an enabled world”.

Gunnedah Shire Council Manager Communications and Cultural Services Eliza Gallen said statistics from the last Census (2016) revealed the Shire’s population was an even representation of men and women, with 6107 females and 6105 males.

“Gunnedah Shire has a history of strong and innovative women,” Ms Gallen said.

“Census statistics also show that 48 per cent of the workforce in the Shire is female, a clear indication of what an important contribution women make to our economy.

“There are many women who run their own small businesses, or contribute to critical industries such as education, health and community services.

“It’s also heartening to have three female councillors on our own Council, and it is a pleasure to work alongside exceptional women both within Council and in our wider community.

“Women across Gunnedah Shire are making the world a better place every day.”

There are a number of activities happening in the Shire as part of International Women’s Week, including a $10 screening today of the movie Bombshell at the Civic with a 1.30pm lunch ahead of a 2.30pm screening.

Sunday is Wear Purple Day to support International Women’s Day. Gunnedah Shire women are invited to wear purple, put your arms out in front to create an equal sign, take a photo and post it on social media with the hashtags #EachforEqual, #IWD2020 and #gunnedah.

For the full program, see the attached program, but please note, the Bombshell screenin is on Thursday, March 5 and not Wednesday, March 4.

“My councillor journey has been challenging, rewarding, terrifying, uplifting, smooth sailing, and the bumpiest ride you can imagine... all of this combining to bring together the most amazing journey for me.

“I have thoroughly enjoyed the whole experience which has given me the opportunity to make (I hope) a positive contribution to the community I love. What a privilege it has been.

“My hope for any future female councillors would be that they would put their hands up for the privilege of enriching their community's social fabric by serving their fellow residents.

“I would trust they would come in with the true vision of service for others and not with any fixed agenda which can hinder a person from seeing all sides of any issue.

“International Women's Week gives us all the opportunity to share our own particular life's journey with other women, in the hope that it may enrich, challenge, encourage and support other women who may have the opportunity and vision to work to make our communities, as well as our world, a better place.”

“As a councillor, I have seen so many changes over the past 16 years.

“The Australian Local Government Women’s Association has been a great supporter of local councils, improving domestic violence support and working to assist young women councillors with financial help for childminding.

“There has been an increase in the number of women going into local government. We are still some way from equal representation, but it has certainly improved. I believe very strongly in supporting women to represent their communities.

“To me, International Women’s Day is a reminder we are moving forward and have been improving every year.”

“My local government journey so far has been a good one, and I have seen no special consideration of me in respect to my gender. In my profession as a veterinary surgeon, gender has been a negligible issue for many years and I don’t expect special treatment in any sphere, and certainly have not received any in local government.

“I hope that no person (male or female) questions representing their community because of their gender, and I hope that continued support can be given to parents generally (such as childminding) if that would otherwise provide a barrier.

“I remember many years ago, a serving councillor said to me that my husband should consider running for council. He never seemed to consider that I should.

“Twenty years after that, I did indeed run myself.

“I hope that raising the profile of female participation during events such as International Women’s Week will change the norm and that gender becomes irrelevant.”

Photo caption: Some of Gunnedah Shire Council’s contingent of female staff show their support for International Women’s Day by making the equal sign.