Gunnedah’s links with Sister City, the Yinzhou District of Ningbo, Zhejiang Province, China, have been strengthened and new business opportunities are in the wind following a recent study tour of China.

Gunnedah Shire Mayor Jamie Chaffey, also the chairperson of Namoi Unlimited, led a delegation of local businesses and exporters on the week-long trip in May.

Cr Chaffey said the visit, which included visits to Shanghai, Ningbo and Guangzhou, showed how many opportunities there were through Gunnedah’s links to China, including strong prospects for primary producers and education.

“We are looking at the best outcomes for education at every level,” he said.

“While UNE [the University of New England] is working with a university in Ningbo, locally, we are building a relationship with the Chunxiao Middle School in Ningbo.

We visited this school of 1200 students from years 7 to 9 and staff watched a video from St Mary’s in Gunnedah.

“St Mary’s are looking at a student exchange program that could see our Gunnedah kids spending time at the school in what would be a valuable cultural experience.”

“The demand is there,” he said. “We want to show our primary producers that there are many opportunities.

“We are exploring options for business investment in a multi-species abattoir in Gunnedah that would meet accreditation for export to China, among other countries. This could be a valuable addition to the Gunnedah and North West economy.”

“In my previous role, I worked in a law firm in Sydney and Canberra and I can explain what’s needed for international small business people who are looking to expand into Australia.”

Mrs McArthur said she had made good connections while in China, including a meeting with the Australia-China Business Council.

“There is also a lot of interest in exporting beef and sheep to China,” she said.

“There is an overwhelming demand for Australian clean and green beef. We really need an abattoir in Gunnedah. We are closer than many other countries, and we don’t have foot and mouth disease.”

The Namoi to the Ningbo Study Tour also saw a Memorandum of Understanding signed with the Foreign Affairs Office, Ningbo, in Zhejiang Province.

Cr Chaffey said the agreement would allow both parties to explore opportunities for investment and trade in agricultural commodities and services, tourism, renewable energy, transport and logistics.

Ningbo is home to one of the world’s biggest seaports and is an important centre for trade and economic activity.

Photo Caption: Images one and two: Gunnedah Mayor Jamie Chaffey during a visit to Chunxiao Middle School in Ningbo, China. 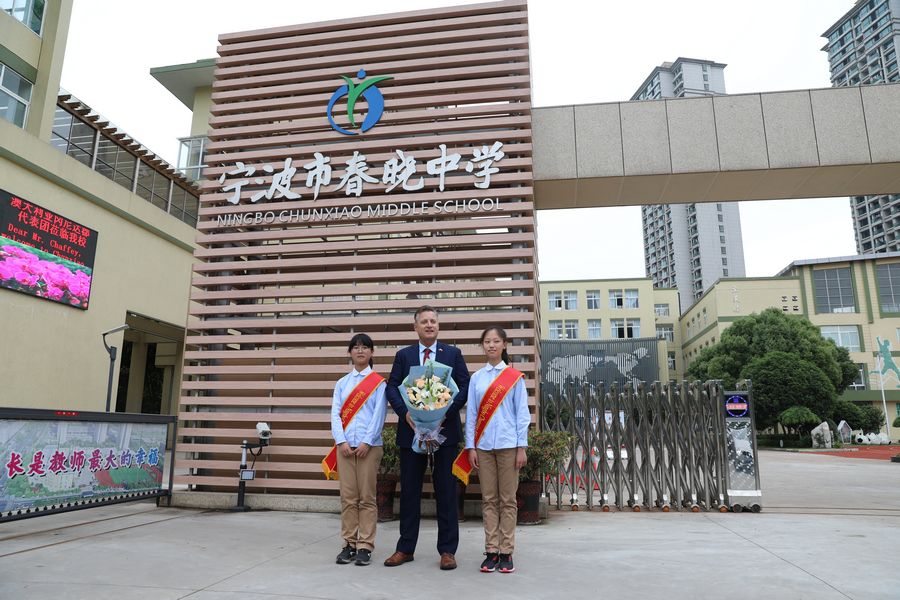